The doom and gloom of the national newspaper headlines regarding the UK property market would make you think Armageddon has arrived – this being the second most interesting topic to the Brits (the first being the weather!).

So, what is happening in the British property market? As with most things in life, the devil is in the detail.

2020 and 2021 were exceptional years for the UK property market.

In Q4 2020 (Q4 being October, November and December combined), an average of 23,071 properties were sold per week in the UK (sold – as in a sale was agreed and the property went from available to sold subject to contract (STC)).

The British property market is only returning to how things were before the first lockdown.

Question – Why do the newspapers use the phrase “house price crash”?

Include the time, policy and efforts that the political parties go to in order to keep British house prices on an upwards trajectory to gain votes and you might believe that a fall in house prices is a total catastrophe.

Nothing could be further from the truth for most homeowners and landlords.

Indeed, when you look at house prices without any emotion, when house prices fall — in isolation — more people win than lose.

So, who wins when house prices drop?

Let’s say you own a two-bedroom Leicester home worth £200,000. You have an expanding family, and you need a third bedroom.

Leicester house prices rising has cost you an additional £9,000.

On the other side of the coin, what if Leicester house prices fell 10%?

As over 7 out of 10 home movers move up the property ladder, falling house prices are not necessarily a problem.

Falling Leicester house prices are great for those who want to move up the property ladder and trade up.

So, who loses when house prices drop?

The first set of people that lose out are homeowners moving down market. The gap between selling a larger home and buying a smaller one narrows when one moves down market. Given the massive growth in house prices over many the decades those homeowners have been in the property market, it’s tough to see this as a calamity, yet it’s certainly a loss.

The second set of people that lose out are beneficiaries of the home being sold when a parent/grandparent passes away.

Let us all be honest; I believe there will be little sympathy in the broader community for those first two sets of people for their loss of money.

Firstly, when your fixed rate deal ends, most of the time, it is wise to re-mortgage to another rate. However, when you have negative equity, the range of mortgage deals open to you will be minimal, so you will probably have to pay your bank/building society’s quite pricey ‘standard variable rate’.

Secondly, suppose you want to sell your Leicester home. In that case, the price you achieve will not pay off the mortgage, which means you will have to find the difference elsewhere (i.e. a gift/borrowing from your family or selling an asset like a car)—in a nutshell, making a move very difficult.

How many people will be drawn into negative equity if house prices drop 10%?

Just 2.9% of homeowners will be in negative equity,
if house prices drop by 10%.

But what would it mean to Leicester house prices if they did drop by 10%?

If house prices drop by 10% in the next 12 months in Leicester, that would only bring us back to the house prices being achieved in September 2021.

Yet what if they dropped by the same percentage (19%) as they did in the Credit Crunch?

If house prices dropped by the same percentage as they fell in the Credit Crunch in Leicester, that would only bring us back to the house prices being achieved in September 2020.

And nobody was complaining about those!

Let me get back to the real problem with falling house prices.

When the country’s house prices fall, that tends to correspond with more challenging economic times. Now, because of rising interest rates and inflation, the price people are paying for a Leicester property is lower than one would have paid in the spring (when you were bidding against multiple offers and had to pay top dollar to secure the purchase).

However, during times of falling house prices, that can start to negatively affect the broader British economy. For some strange reason, homeowners tend to spend less because they ‘feel’ less well-off because the value of their home has dropped, and fewer people move home, meaning there is less choice for people to buy. Lenders start to be meaner about lending because they are nervous about arrears and bad debts building up.

2023 will be challenging for many Leicester families, yet …

As we go into recession, the share of homeowners exposed to falling house prices is smaller than in the 2008 Credit Crunch.

Ultimately, unemployment is the main factor of whether this goes from being a possibly benign slow 10% decline to a full-scale crash.

If homeowners keep their jobs, they will keep paying their mortgages. However, (as in the 1988 and 2008 house price crash) if people lose their jobs, mortgages don’t tend to get paid, and that is when repossessions increase and forced selling starts to take effect.

However, looking at the Autumn Statement, the Government have learned the lesson of previous generations and vastly improved the safety net of contributing to people’s mortgages. Should someone become unemployed, at the moment, homeowners must wait 39 weeks before the Government will help pay the mortgage (thus increasing their chances of repossession). This will be reduced to 12 weeks in the spring, reducing mortgage repossessions later in 2023/4.

So where does that leave us?

We should be less keen to celebrate ‘house price booms’ throughout the ‘good times’ because the usual ‘house price crashes’ tend to worsen the ‘bad times’.

In its place, we should concentrate on what British society can do to obtain a more stable property market over time. That is a topic for another article in my property blog! (Do send me a message if you want a link to the other articles I write about the Leicester property market).

Final thoughts: the house prices being achieved in late 2021/early 2022 in Leicester will be a distant memory in a year’s time, yet for most people, that is not a bad thing. 2023 will be a challenging year, but don’t let the price paid for property by 3.54% of the UK population (the percentage of privately owned houses that will sell next year) affect your outlook and worth as a homeowner/landlord. 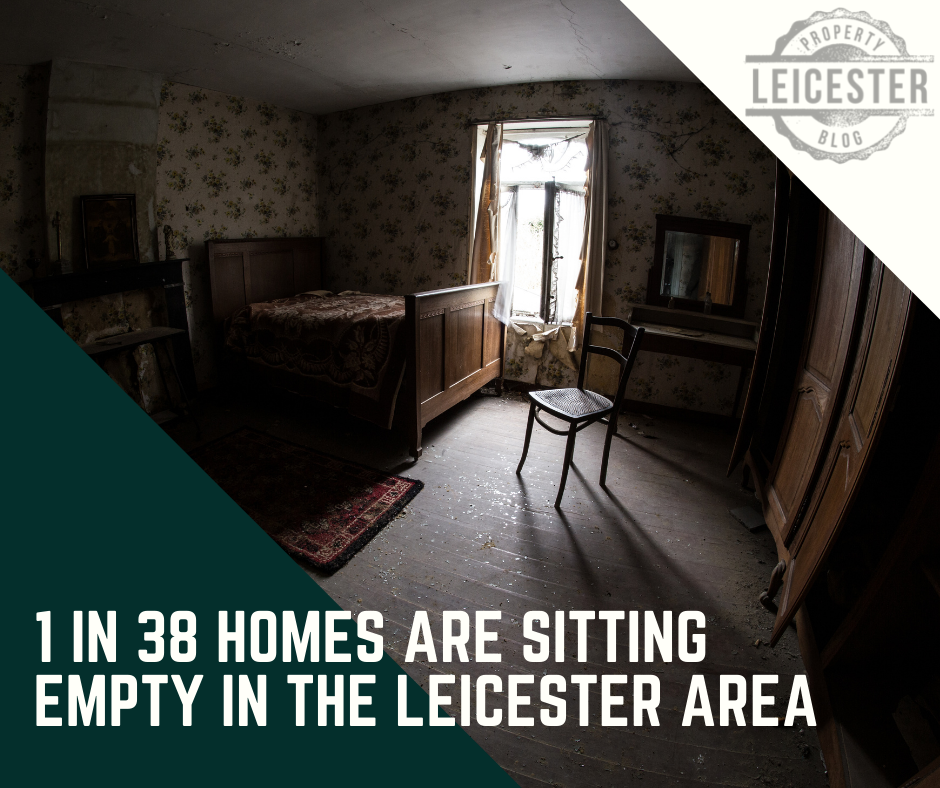 1 in 38 homes are sitting empty in the Leicester area